Omitting “NO” From Your Vocabulary 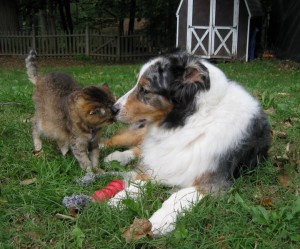 On New Year’s Eve I posted a list of ten resolutions for dog owners and said I’d be elaborating on some of these in future blogs.  One of the resolutions was to omit the word “no” from our vocabularies as dog trainers, stating that “When a motivated dog is inhibited by an exclamation of “no”, he may become frustrated and then redouble his efforts behind your back. Most important, yelling at your dog may make him nervous around you. Instead of telling him what you don’t want him to do, try telling him what you’d like him to do, and reward him for it.”

Why is “NO” not a useful or desirable training tool? Here are a few reasons. I’m sure you can think of more (and please comment if you do).

2. In some cases, the behavior you are trying to stop is a strongly driven or excited behavior. By saying only “NO” you’re offering no alternative outlet for that energy. Highly aroused dogs easily channel that energy into other behaviors such as barking, mounting or aggression.

3. Even punishment has its rules. “Corrections” or punishment must be aversive, they must be associated 100% of the time with the target behavior, and they must happen during or immediately following a behavior — think of “immediate” as being the time it takes for a set of keys to drop from your hand to the floor. Responding to your dog’s behavior with “NO” probably doesn’t follow the first two rules. First, saying “NO” is not really aversive to many dogs (keep in mind that each dog is an individual, and what is unpleasant to one might be meaningless to another). It’s a soft word. This doesn’t mean that you should shout phonetically sharper words at your dog. It is simply a reminder that “no” is not really an informative word for many dogs. Second, and more important, you might not always be there to deliver “NO” to your dog’s ears. If it is only a “sometimes” consequence of misbehavior, it will not work.

4. Punishment — whether it is called “discipline”, “correction” or any other euphemism — can be frightening for your dog. In fact, in order for it to be effective (see #3), it has to be, by definition, nasty. This is why a verbal “No” is often followed by leash popping or using a shock collar. Assuming that you live with a dog because of love and attachment, it makes more sense and is kinder to give the dog instructions about appropriate behavior than to be punitive about inappropriate behavior. And if there are children in your family it is reassuring to know that they are interacting in gentle and safe (for all parties) ways with the family dog. Frightened dogs become hand-shy, fearfully aggressive and reluctant learners.

At this point you might be saying to yourself, “Fine, but aren’t you doing what you’re telling me NOT to do — discouraging me from saying “NO” without giving me instructions about the alternative?  In that light, here is a video by Emily Larlham in Sweden, whose youtube channel “kikopup”, is inspiring (for more information see www.dogmantics.com).

In future posts we’ll talk more about what “to” do, rather than what not to do. There are a great many positive, reinforcing words and actions that will make our dogs happy to work with us.

5 Responses to Omitting “NO” From Your Vocabulary