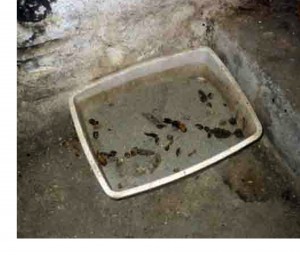 One of the benefits of making housecalls is being invited into the homes of my patients. In homes with cats, litter boxes make for some interesting social as well as elimination (that is, bathroom) behaviors. Not everyone is aware of the “ideal” litter box environment, which I think is understandable, given the sizes (often too small) and types (covered, in many cases) of boxes available in pet supply stores.

Urinating and defecating outside the litter box is the most common behavior problem in cats. Why does it happen and what can you do to prevent it? Sometimes the best illustrations are those that tell you what not to do. So here are some examples of boxes that needed fixing, each from a case in which a cat was eliminating outside the box.

There was one litter box in the center of the vast, finished basement. At first glance, the size and setting weren’t bad. But at second, it turned out to be a wooden box built by the owner 27(!) years earlier, and which had apparently absorbed 27 years’ worth of urine and ammonia. Clearly, 25 years would have sufficed.

Not an uncommon finding, and I actually appreciate seeing the box “as is” during the housecall. We’ve all been there, and our lives are busy. But some boxes are scooped so infrequently, the cat finds herself perching on a clumping litter Rock of Gibralter. At least this one is an easy fix!

Basements are popular litter box havens for the owner, but not necessarily for the cat. In one memorable case, the basement box was on an uneven cement floor about 10 feet from the stairs. Between the stairs and the box were several planks of wood, so that the cat could walk to the box without stepping in the 1-2 inches of water left standing after each rainfall. It was tricky to stay on the planks in the dark, as well. Not ideal!

In an effort to hide the litter box, it was placed in the recesses of a homemade cabinet. In order to reach the box, the cat had to climb into a hole on the side of the cabinet and go, in the dark, to its other side, stepping down into a “drawer” which held the box. This labyrinth was not easy to maneuver, and the cat eventually decided that open air was a safer bet.

In this home, the litter box was nested snugly between the toilet bowl and the bathtub. If the cat happened to be doing his business at the same time as a flush or a shower, his experience would be less than pleasant, and sometimes less than dry, as well. To add insult to injury, the box had to be quite small, almost dishpan size, to fit into this little space.

Second only to the bathroom, the laundry room is a popular litter box destination. Unfortunately, it was one of the noisiest rooms in this house, especially when the washing machine changed cycles or someone threw a belt buckle into the dryer. All it took was a noise-sensitive cat, and this was another great example of feline learning.

Okay, not a pretty topic, but when dogs and cats live together, the litter box might be visited often…by both. In this home there were many cats, and even more Silky Terriers. Multiple litter boxes were lined against the dining room walls and one little male dog, in particular, walked from box to box looking for snacks, scaring the cats away as needed (it was the dining room, after all).

Cats are very smart, as we who live with them can confirm. If a litter box is out of reach, uncomfortable, dirty, or inconvenient, they might simply choose an accessible, comfy, clean and convenient alternative: your carpet.

Do you have an unusual litter box story?

This entry was posted in Cats and tagged cats, feline elimination, litter box. Bookmark the permalink.