Infant killed by the family dog; What can we learn? 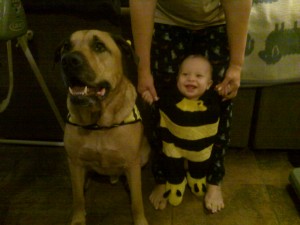 Sadly, there is no lack of news stories about dogs that have killed infants. I try to sift through the media blasts to find any information about the reasons – behavioral, medical, environmental — for each tragic story. In most cases a rational explanation can be cobbled together. Understanding the reasons for such tragedies might help in their prevention.

Two days ago, a one-year old boy was killed by his grandmother’s dog on the evening of the baby’s first birthday. The dog was quite big, but otherwise, according to a published interview, he was good with people and had never shown signs of aggression. The baby had been given a bottle in the living room after an evening of opening presents, and crawled over to the dog who was lying nearby. It’s unclear whether the baby petted him or used the dog to pull himself up, but as the grandmother bent to pick up the baby, the dog bit his head and shook him.

What could have happened? The news reports, read with a behavioral grain of salt, would lead to speculation that:

1. The dog might have been food-aggressive (resource-guarding) with the milk nearby, especially if the baby had dropped the bottle as he was pulling himself up.

2. The pulling or holding might have triggered relatively new and significant pain in the dog, a 6-year-old giant mixed breed. (Giant breeds age earlier and may be more susceptible than average-sized dogs to orthopedic problems.)

3. The baby was crawling but still not walking. Infants change so rapidly that each stage in their development can present new “threats” to dogs. It’s unclear whether the baby and dog lived together but even in the same household dogs can be fearful of infants that lie on their backs, then roll over, then sit up and reach, then crawl, pull up and begin to walk unsteadily. The dog might have been fearful and defending himself — a very common scenario even with otherwise nonaggressive family dogs.

4. Dogs do not love to be approached and touched while they are lying down. We don’t know if this dog was in a corner, under furniture or on his bed, any of which might have increased the risk. It might be that, over the dog’s six years of life with the family, he responded to approaches by walking away or, as many dogs do, exhibiting “calming signals” that indicate his discomfort about being approached. A baby’s approach might have triggered overt aggression instead of more passive body language.

Just a few speculations. It’s unlikely that we’ll learn more about this very sad situation, but I think we know enough to advise parents of infants to simply never allow a baby to approach a resting dog, and never, ever to allow the baby to pull up using the dog’s body – period. There is no need for nuance with this instruction. There are countless parents who continue to be unaware. Veterinarians, behaviorists, trainers and other dog professionals need to inform them of this risk.

2 Responses to Infant killed by the family dog; What can we learn?