Should young children have their own service dogs? 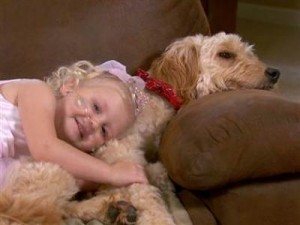 The story of a 3-year-old girl born with a debilitating lung disease, neuroendocrine cell hyperplasia of infancy or NEHI, is both heartbreaking and heartwarming. Although this brave, adorable little girl and her parents have to cope with so difficult a situation, she is thriving and is now a happy, silly and active 3-year-old. To help her maneuver around with the always-present oxygen tank, her parents obtained a service dog. Now the family and the service dog, a golden doodle (a mix of standard poodle and golden retriever) named Mr. Gibbs, are being profiled and interviewed on the news and social media.

In a recent segment on NBC’s Today Show, little Alida was seen climbing, swinging and in the studio for an interview with her parents, Aaron and Debbie Knobloch. In each shot and in the studio, the young Mr. Gibbs was present. In a small voice, Alida tells him (complete with an impressive hand signal) to “down”.  In the video and, especially, in the studio, Alida pulled on Mr. Gibbs’ leash and teased him a bit with a bandana (which he gamely tried to catch). All of which seems harmless enough — and, for most viewers, easily outweighed by the benefits of the bond between a great kid and an amazing dog.

From a behavioral  perspective, though, it seemed more complicated. Perhaps not exactly spine-chilling, but at least a little spine-cooling. I thought the pup showed some conflict behavior….conflict in the sense of “I’m a bit overwhelmed but have to stay put”.  He begins, several times, to move away but is restrained. At about 5:00 in the video, he yawns. Yawning is, thankfully, one of the clearer signals that a dog is less than comfortable. Dogs yawn when they are told to “stay”, when they have to wait a little too long for a treat, and other situations of mild frustration or discomfort. But when yawning is seen during an interaction with a little girl, and that little girl has been encouraged to be, basically, in the dog’s space at all times, there might be a problem.

What problem, you might wonder? I can think of two. First, it is not in the dog’s best interest to be persistently tethered, literally, to a small and active child. Second, and more important, dog bites are common, and children are the victims most often presented to emergency rooms for dog bite injuries. Sadly, the relationship featured here is a risky one. Mr. Biggs cannot get away, even if it might be his first choice during a difficult interaction and Alida, a typical 3-year-old, cannot be expected to recognize his stress. If he moves his head away, she might pull it back (as she did on the Today show segment). If he stands to walk away, she might tug his leash and insist, when he is stressed, that he lie “down”. Children are impulsive, physically demonstrative, unpredictable, and generally challenging for even the most tolerant dog. The kids don’t know any better — which is why their safety is entirely and solely, all 100% of it, in the hands of their adult caregivers.

The use of service dogs for young children is, unfortunately, increasing in popularity.  There are service dogs assigned to children with autism and other special needs. From the perspectives of veterinary behavioral medicine and dog bite safety for children, this trend deserves a second look. Until children are old enough to understand the limitations of their canine charges, and to realize dependence is mutual, they should not be given “control” over their service dogs. It is certainly a potential risk for the dog to accompany them to school.  It is up to parents and other caregivers to take responsibility for the needs and welfare of both child and dog. In that world, Alida and Mr. Gibbs would enhance each other’s quality of life much more safely.

6 Responses to Should young children have their own service dogs?